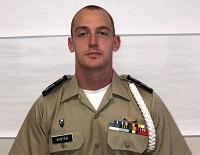 C/MAJ JACKSON SOOTER was recognized on Monday by the California Cadet Corps at the 2020 Individual Major Awards Ceremony. He won First Place in the Senior Division, Overall Cadet. Jackson will be awarded the General Joseph W. Stilwell Senior Division Outstanding Overall Cadet Award, and is recognized as the most outstanding senior division overall cadets in the state. In recognition of his accomplishments as a First Place Winner, he will receive a Gold medal, gold star, and appropriate individual award. Also, a US Army officer saber (The Stillwell Saber.)
C/MAJ Sooter has competed in the Individual Major Awards for the last four years and he placed each year at the State Level. His dedication to the LMA and the CACC has earned finally earned him recognition as the number one Cadet in the California Cadet Corps. "Bravo Zulu" Jackson, Job well done.
After graduating from LMA C/MAJ Sooter will move on and start the next chapter of his life. He will head off to Marine Corps Recruit Depot, San Diego Ca., where he will undergo three months of Marine Corps Recruit Training. I say, "Second to None", "Essayons", and soon it will be "Semper Fidelis" Always Faithful!
Congratulation and we're so proud of you,
C/CPL Yvette Flores is a first year cadet at LMA and she was recognized by the California Cadet Corps at the 2020 Individual Major Awards Ceremony. She came in Second Place in the Senior Division First Year Cadet. Job Well done Yvette!